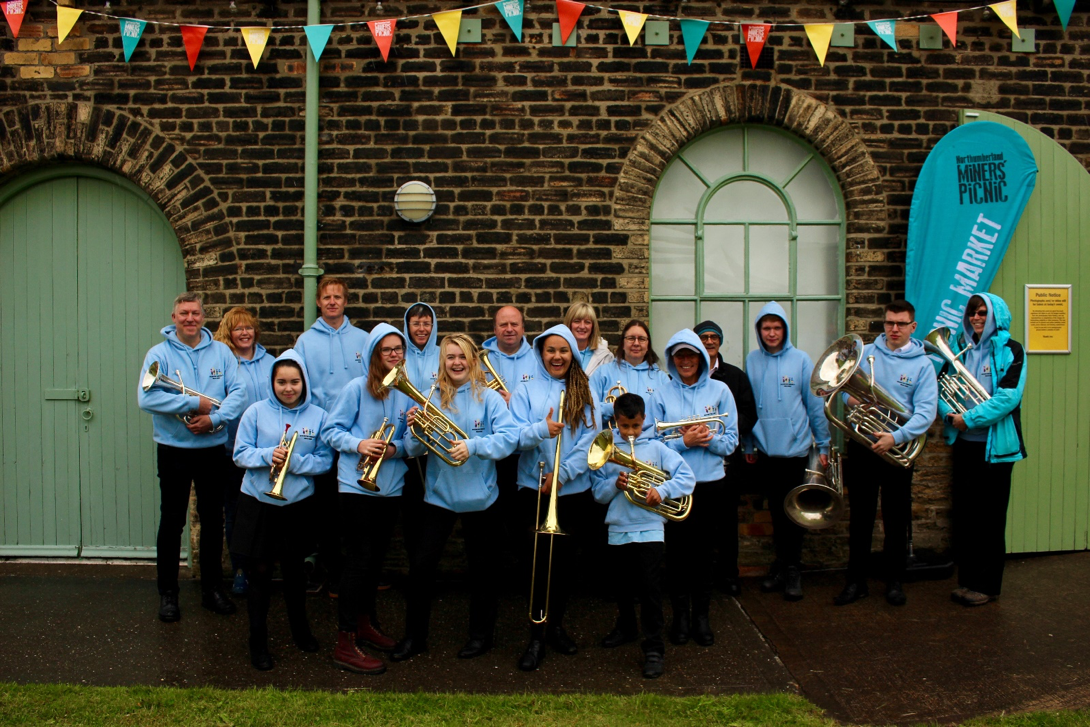 Do you fancy having a go at playing a brass instrument? Bedlington Community Brass Band would love to hear from you, here they they explain what they do…

Brass bands have been and remain a huge part of community life in our area from the time when the landscape was dotted with coal mines. You can follow the history at Woodhorn Museum, with its amazing display of miners’ banners, and Durham Miners’ Gala fills the streets of the city each year with brilliant bands; but Bedlington hasn’t had its own band for many years … that is, until five years ago.

Music Partnership North (MPN), the music development organisation for young people in our region, gained funding from Youth Music to start a big brass playing project in Bedlington’s schools. Whole classes were able to try out and learn brass instruments, with schools forming ‘minibands’ and special projects to bring the players together each year at the Miners’ Picnic in Ashington.

Brilliant! But what happens when the children get really hooked? What happens when they want more, but they’re not good enough to join one of the local competition bands? That’s where, for us adults, the genius of the project kicks in. A key part of it was to begin a Community Brass Band in Bedlington, and five years ago Bedlington Community Brass Band was formed. It’s a Brass Band, but not as we used to know them, because absolutely anyone can join. And they do. Chris has played brass instruments all his life, but his wife hadn’t – he dragged her along three days after she’d first blown into a trombone to see what would happen –  she was made welcome and is still blowing! Band members include children who’ve been part of the Schools’ Brass Project, parents who’ve been inspired by their children, people who used to play long, long ago and fancied picking it up again and players new to brass and even new to music. Members comment that one of the best things about the band is the friendliness, the people, and the fact that all generations come together in it. Sometimes the grown-ups wish the young ones were a bit less chatty, and sometimes the young ones wish break times at band practice were longer, but everyone agrees that getting along together and making music together is fantastic.

With professional support from our tutors and lots of help and encouragement from band members old and young, new members are really made welcome and have fun. The great thing about a band is that if you make a mistake, no one minds, and there are usually plenty of other players to cover it up!

Band members include children, parents who’ve been inspired by their children, people who used to play long ago and even players who are new to music.

So far it’s been an exciting ride. We’ve made friends with other bands and performed with them in churches and community venues; we’ve helped out at fundraisers and community events. A big highlight has been playing each year at the Miners’ Picnic alongside competition bands and the minibands, in sunshine and in rain (remember those ponchos, everyone?). We’ve played music specially written for us. We’ve played with international star brass ensembles and we’ve even played Hall One at the Sage. We play all kinds of music from traditional hymns and marches to pop music and movie tunes, and all the band members have noticed how much we’ve improved over the years – but we still welcome all newcomers, whatever their playing level!

From the beginning, the band has been funded through amazing support from MPN, who have raised funds from Youth Music. But we always knew this could not go on for ever. So band members formed a Trust to look after the community band part of the project and to give us the chance to build a band for the long-term future. We still have very close links with MPN; our conductor and tutor are MPN people and MPN sends members from minibands and the ‘trainer band’ to us when they are ready; but we have also been able to secure support from local businesses and West Bedlington Town Council to help with band expenses: room hire, tutors, music, instruments, insurance and our (‘very cool’, according to band members) uniforms. Without that kind of support, we couldn’t survive and we couldn’t remain open to all.

For the future, our band wants to play the best part we can in our local community. We love to be involved in local events and with local life; we’ve recently been invited into a care home and we are excited to see what memories and enjoyment we will spark with the residents. Music is woven into our lives in so many ways, and the more we do, the more fun life is!

So for our future we need two things: we need supporters who can help fund the band or join our lovely committee who do the behind the scenes work to run the band; and we need players. We are really keen to grow the band and to welcome anyone who used to play or who fancies having a go. We can provide instruments and help with learning, and the band subs are low because we want to be accessible to all. We rehearse on Tuesdays in termtime (but not every single week – check our facebook page for details) from 7-8.30 at Bedlington Community Centre. If you think that might be you, find us on facebook and leave a message, or come along and see us – and give us a try. We need you!

New Look and New Menus for Ashianna in Bedlington

Upgrade your garden with a summerhouse from PlantsPlus