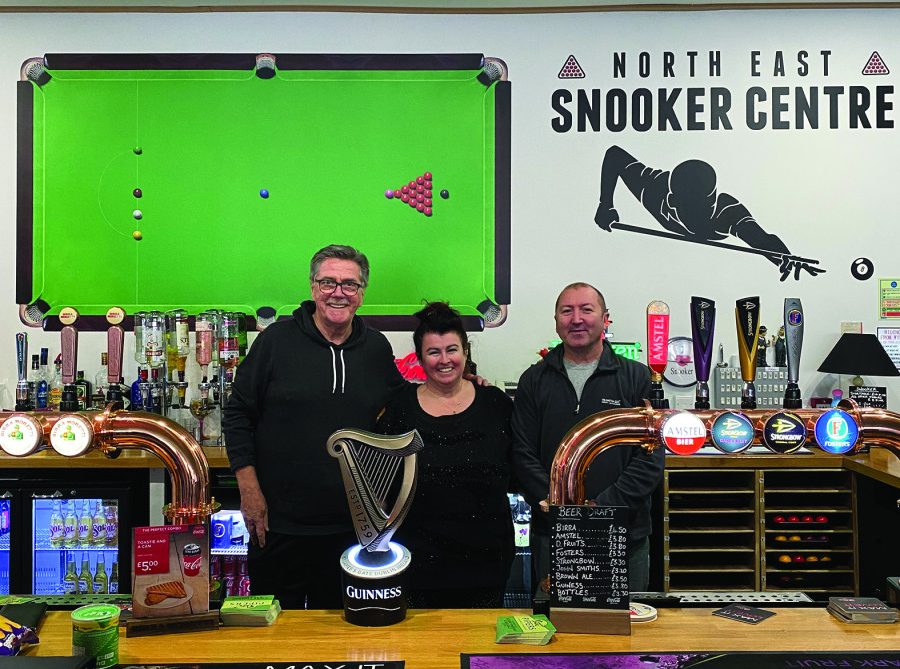 Former Snooker World Champion Cliff Thorburn, affectionately known as ‘The Grinder’ for his methodical style of play, recently visited the North East Snooker Centre in North Shields, both to catch up with his English friends, and owners of the centre, Paul and Alison Rinaldi, and to check out the amazing facilities at the centre.

Canadian native Thorburn won the hearts of snooker fans worldwide when he was crowned World Champion in 1980, a time when snooker was at its peak and games regularly attracted 20 million plus viewers.

‘The Grinder’, the first player ever to score a 147 on television and winner of multiple snooker events, recently announced his retirement from the sport at the age of 74, playing his last game in January of this year. Cliff spent a week in the North East and was hugely impressed with the brand new snooker and pool venue, right here in North Shields.

The North East Snooker Centre, based on Queen Alexandra Road, is the only club in the North East to play host to four Professional Star tables, the same type of table you see on televised events. The centre also has two high quality Riley Aristocrat tables with steel block cushions, and four standard Riley tables, similar to those found in most social clubs, but in tip-top condition.

For those new to the game, or even for experienced players wanting to build their potting confidence, the club has a high quality ¾ table. For ardent 9-ball and 8-ball pool players, the couple have installed tournament quality tables, offering the best playing surfaces for both sports.

Also, be assured you’re in good hands when seeking advice on improving all aspects of your game. Paul Rinaldi himself is a former professional player, and his main advice is always ‘Keep it Simple’. Paul is continually involved with many of the current top professionals and also helps run ‘The Cue Zone’ during the World Championships in Sheffield, as well as other ranking tournaments. If you’d like help from a coach who has made over 1000 century breaks then look no further. Whether you are a beginner looking for basic tips, or an experienced player seeking help with certain aspects of your game, pop in and see how Paul can help improve your game.

Because of the contacts Paul has built up over the years, the centre has already hosted Professional Snooker Exhibitions and other quality events. In their first year, cue sport legends Dennis Taylor, Steve Davis and Cliff himself, as well as world champions Shaun Murphy and Mark Williams, have all made appearances at the centre. With more events planned for the coming 12 months, keep an eye out for more world class stars coming to the area.

As well as catering for adult enthusiasts of all abilities, the club also provides quality coaching through their Saturday Morning Kids Club. Boys and Girls ages 8 to 16 will truly benefit from attending a fun-packed morning of cue sport activity.