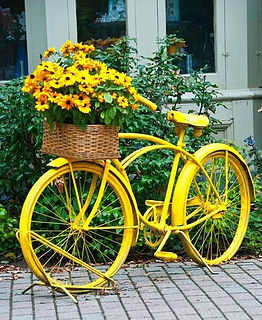 The Tour of Britain organisers are urging community groups, schools, businesses and land owners to show their support for the race by creating bigger than life works of art in open spaces across the North of Tyne area.

Following the success of the inaugural contest, the Tour of Britain National Land Art Competition will return for the 2019 race, which takes place across North of Tyne as stage three on Monday 9 September.

Anyone can also get involved by dressing their streets and shop windows with colourful bunting, flags, floral or cycling displays.

The 114-mile stage starts in Berwick, passing through Northumberland and onto the North Tyneside coast, and into Wallsend, before continuing to Newcastle city centre, with a spectacular finish on Grey Street.

In 2017 the Tour of Britain swept through Northumberland creating a wave of excitement as some of the world’s top cyclists cycled through our communities. Residents and businesses colourfully dressed the route with bikes and bunting, and thousands of spectators lined the route to cheer on the riders and give them a fantastic welcome.

Organisers hope that scores of local communities across the North of Tyne area will be just as involved this year. The tour passes right through Morpeth, Bedlington and Cramlington, as well as a host of local villages.

As well as the chance to be crowned winner of the national competition, those that take part could be featured on TV, with the race itself aired to 166 countries worldwide.

Peter Jackson, Leader of Northumberland County Council added: “We want everyone to have a fantastic time when the Tour of Britain arrives on our patch, and make it really memorable. Communities completely got behind the Tour in 2017 and did Northumberland proud by decking the route in the famous red and yellow colours. So let’s make it bigger and better for 2019, and show the world what makes us special.”

North of Tyne Mayor Jamie Driscoll said: “We’ve seen from other events like the Tour de France and Yorkshire what a spectacle these races can be when communities get involved, and we want to create that same kind of buzz in our region. The Tour of Britain will be broadcast nationally and internationally – this is great chance for the world to see what a beautiful area we live in.”

Here are some ideas to show your creative side:

ITV4 plan to screen live free-to-air coverage of each stage, along with a nightly highlights programme of the best of the action, which will be available to 166 countries around the world.

The eight-stage race runs from 7 to 14 September –  full route details can be found at: www.northoftyne-tob.co.uk

8 Reasons to Advertise in Print Media