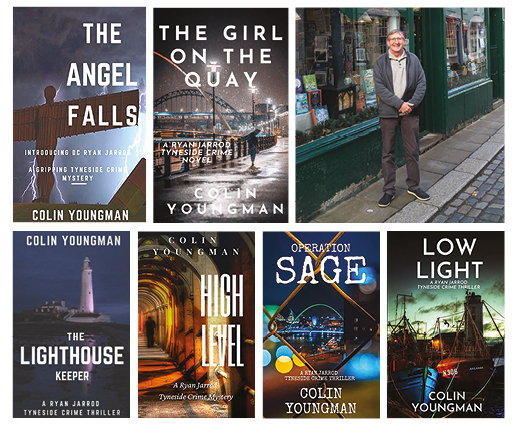 We may earn an affiliate commission for purchases made through links in this post at no additional cost to you.

Be it the foiled bombing of Newcastle United’s St James’ Park, a girl snatched from the Quayside, a body washed up on St. Mary’s Lighthouse or the desperate hunt for a drug gangmaster, Colin Youngman is transforming the North-East into an electrifying crime hotspot with his Ryan Jarrod series of Tyneside detective novels.

The author first devised the rough plot for his crime fiction over 20 years ago but shelved the idea after struggling to find the perfect setting. What he didn’t know was that inspiration lay at his doorstep.

“I had an original story started many moons ago and just couldn’t get the setting right. Then, I attended a writer’s convention where I bumped into LJ Ross, who is another Northumberland writer who sets her books in the region. I got talking to her, and it dawned on me, ‘why don’t I try that?’

Colin re-visited his old story, changed some of the locations to places he’d worked, landmarks he was familiar with, and pubs he’d got drunk in, and suddenly he found it all fell into place.

The first of his books, The Angel Falls, was published in 2020 and saw the birth of the main character Ryan Jarrod. Fast forward two years, having won over readers in the region and further afield, there are now six stories in the series with a seventh in the pipeline – and they have been described as ‘LJ Ross meets Ann Cleeves but with the gritty, urban twist of Ian Rankin and Peter James.’

The author’s venture into crime fiction was only meant to spawn one book but, given the reception the initial release received, the Geordie author – who now lives in Northumberland – kept it going.

“I try to depict the region as it is – warts and all – and I’ve been overwhelmed by the positive feedback the books have received. I didn’t start with the intention of writing a series, but people kept asking me for more. The response has all been really humbling.”

The Ryan Jarrod books – by Colin Youngman – are available from Amazon in e-book and paperback formats (the entire e-book series costs less than a Domino’s!), with paperbacks also available from Cogito Books, Hexham.

Click here to buy the books online at Amazon.co.uk.

Is your Conservatory too Warm in the Summer and Too Cold in the Winter?